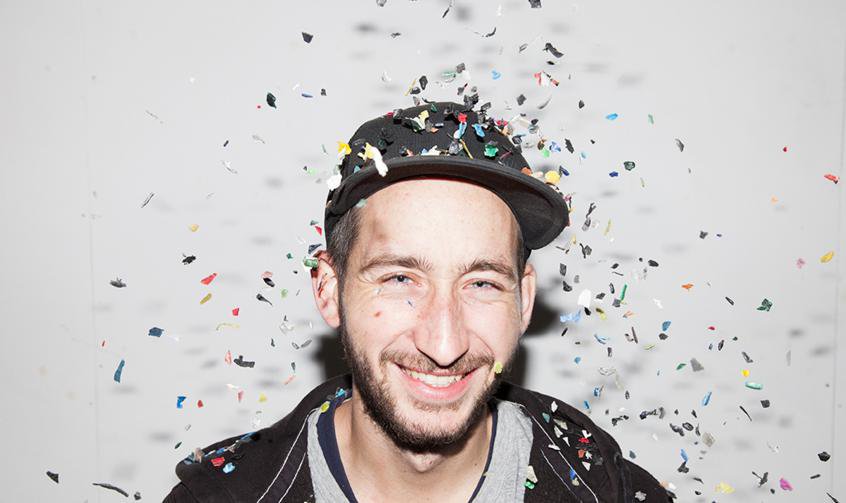 A machine that turns plastic waste into useful objects: this is Dave's approach to promoting recycling of plastic waste at all levels

Tick, tock: 200 kilograms. Tick, tock: another 200 kilograms. Every second that passes, that is the amount of plastic that is washed out to sea, according to data from Greenpeace.  The waste abandoned in the ocean adds up to the shocking total of two million tons annually – enough to balance a scale with 800 Eiffel Towers on the other side. Conscious of the enormous amount of plastic which is thrown away, the selfless Dutch designer Dave Hakkens decided to do something about it. The result is a platform which anyone can use to build a small recycling plant at home. Thanks to this idea, Hakkens has been named as one of MIT Technology Review, Spanish edition´s Innovators Under 35 Europe 2017.

Launched in March of 2016, Precious Plastic aims to represent a home solution which provides users with the necessary technologies to recycle, which are especially inaccessible in developing countries Its creator affirms that "the project is very popular [in these types of region] because there is plastic everywhere and people have easy access to it." Beyond industrial recycling and citizen participation in separating waste from recycling, this graduate of the Design Academy of Eindhoven (Holland)´s idea of recycling consists of each person building their own recycling workshop. To this end, he offers free manuals, maps and videos where he explains in minute detail how to set up a series of machines using basic, cheap materials and tools which can be easily found anywhere in the world.

"Everything has been designed so that people with limited resources can build it, and allow people in Asia and the middle of Africa to recycle," the young innovator explains. For now, the home recycling plant is comprised of up to four machines: one which shreds plastic waste, producing a new prime material in the process that can be used creatively and artistically by mixing shapes and colors; the other three allow users to create new objects, whether by heating the plastic and pouring it into a mold, shaping the cable with an extrusion machine or using an oven to compress it.

By combining several techniques, Hakkens´ recycling plant allows users to create door handles, containers, lamps, utensil handles and anything else the imagination can devise. The best part: learning to use it is free. "This recycling project is the 100% open source project largest in the world, and that is a crucial aspect that makes it unique," the designer points out. "Anyone in the world can start to recycle and share their learning with others," he adds.

Hakkens has, successfully leveraged the do-it-yourself craze which began to emerge a few years ago thanks to Pinterest, Instagram and YouTube as well as the rise of social media, where he has curated an online community of over 6,000 members from around the world where people share their creations, and which also provides financing and resources to collaborate on projects. "Currently, the team is made up of nine people – volunteers who help out from Mexico, Spain, Iceland and Italy, and we accept donations, which allow us to further the development according to our criteria," the young designer explains. Their criteria seems to be delivering positive results: approximately twice a week he receives emails from people who have starting building their own recycling plant.

Hakkens´team is working on a virtual map which will highlight all of the points where users have built these DYI plants. This is one of the objetives for version 3.0 of the project, which will be launched in October of this year and will also enhance the techniques and example products offered to users. One of the greatest novelties is the creation of an online marketplace. "The online marketplace, which we call a bazar, will allow people from all over the world to sell the things they have made from recycled plastic and offer machines and tools for creating them." Hakkens highlights that the ultimate objective is to "drive the creation of small businesses based on recycled plastics."

Hakkens aim of improving adoption and generating a business ecosystem around recycling and recycled waste is a step in the right direction, and the community of Precious Plastics enthusiasts has emerged quickly, as the executive director at the National Entrepreneurship and Innovation Institute of Brazil and jury member for the Innovators Under 35 Europe 2017 awards, Ingrid Stoeckicht, is quick to point out. In her opinion, "the project allows social entrepreneurs worldwide to establish their own recycling business." This expert describes Hakkens´ work as "incredible, and highly attractive both socially and entrepreneurially."

His flexible components could change the way people use electronics.
See all in Computer & electronics hardware…