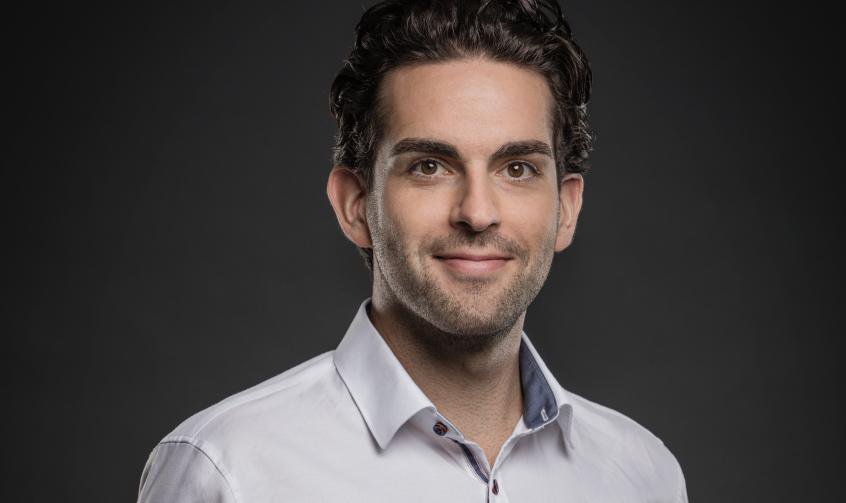 Designing the private transport of the future with an electric vertical take-⁠off and landing jet, 5x faster than a car

The start-up Lilium has developed the world’s first vertical take-off electric jet. After a successful maiden flight, the engineers are planning a larger version as an air taxi.

The aircraft is already a YouTube star. 1.5 million users followed along as the world’s first electric vertical take-off jet took off from an airfield at Mindelheim in Bavaria, flying complex maneuvers smoothly and quietly. Does this maiden flight mark the beginning of a new era in aviation?

Perhaps. The egg-shaped aircraft was built by Lilium Aviation, a start-up from Munich. It may make small aircraft gliding over traffic jams a reality. ‘Electric VTOL craft such as this will revolutionize transport’ according to the confident Daniel Wiegand, CEO and one of the founders of Lilium. Now 31 years old, he won a prize as a schoolchild for an aerodynamic wing in the German youth science competition, ‘Jugend forscht’. He then went on to study engineering and flight propulsion technology at the Technical University of Munich, having flown gliders since he was just 14 years old. Now he wants to open up airspace to everybody with aircraft that work like taxis. ‘In the future, you’ll book an electric jet via an app to pick you up from the nearest pick-up station.’

He came up with the idea of an Uber in the skies while on a semester abroad in Glasgow. Wiegand stumbled across a YouTube video with an American jump jet named the V-22 Osprey, a military aircraft. Able to take off and land with a minimum of space, Wiegand wanted to make such a thing possible for private transport. The aircraft just had to be quieter and more environmentally friendly. The Tübingen-born student inspired three classmates with the idea: engineering postgraduate Sebastian Born, aerodynamics specialist Patrick Nathen and mechatronics engineer Matthias Meiner. In a shared flat, the four students calculated the physical parameters for a Personal Air Vehicle (PAV). In February 2015, they founded Lilium, for whose name the aeronautical pioneer Otto Lilienthal served as an inspiration.

Investors were equally inspired. The founders received money from the EU start-up funding programme Climate-KIC Accelerators, from Business Incubation Centre Bavaria, and from the UnternehmerTUM fund run by TU Munich. Since then, investors have come to include the well-known venture capitalist Frank Thelen, Christian Reber, who sold his app Wunderlist to Microsoft, and Atomica, the investment firm from Skype founder Niklas Zennström. They put around ten million euros into the start-up.

Wiegand’s team has since grown to 45 staff. In the workshops at the 1500-square-meter large company headquarters whir two head-high 3D printers, manufacturing individual parts of an aircraft model. On a workbench lie wings to which employees are attaching engines. In another room, the passenger seat is already undergoing tests ‘so that there’s proper leg space later on’, according to Wiegand. Thus emerges a four-meter-long electric jet, true to scale and built in the so-called canard design. It has two horizontal stabilizers towards the front, and two wings with a span of seven meters behind. There is space for two people. The YouTube video shows the test flight. ‘It was still unmanned because to begin with we only want to gather data about the flight behavior’, Wiegand explains. ‘The jet can fly autonomously, sure, but that isn’t allowed. That’s why a pilot controls it remotely from the ground.’

Anything which might make the jet too heavy for the electrical vertical take-off was axed. The 400-kilogram aircraft is largely built from carbon fibre. It can support a maximum load of 200 kilograms and can apparently operate at heights of up to 3000 metres and cover a range of up to 300 kilometres. ‘The advantages are obvious’, says Wiegand. ‘We’re taking transit transport to a height where it doesn’t cause disruption, and we’re doing so with an environmentally friendly, CO2 neutral electric jet which will set totally new standards in terms of noise emissions.’ Reportedly, the jet isn’t much louder than a truck during take-off and landing, and can lift-off from a field 15 square metres in size.

Thanks to an on-board computer handling take-off, landing and stabilisation, the electric jet is supposedly more comfortable and easier to fly than a helicopter. The founders hope to have it approved as a ‘Light Sport Aircraft’. This is because it would then require no more than an ultralight pilot permit, which is comparatively easy to obtain. The two-seater should hit the market in 2018 and cost an estimated 500,000 euros. You can even reserve the Lilium jet today for 5000 euros, which will later be set off against the purchase price.

The special feature is most notably the aircraft’s propulsion: the engines pivot downwards at take-off, producing lift. Once the aircraft is high enough, the engines slowly turn themselves horizontal and provide horizontal thrust. The turbofan engines work similarly to those of a jet plane; they suck in air, compress it and force it back out. Thanks to high-performance electric engines, however, they run more quietly and produce no emissions. In addition, the electric drive makes the engine light and compact enough to mount a total of 36 of them directly onto the wings. Lots of small engines on the wing’s leading edge accelerate the air directly on the wing, thus preventing the formation of vortexes which would slow down the aircraft. The energy expenditure of the plane is lowered as a result.

At a travelling speed of 300 kilometres per hour, the energy consumption falls to that of an electric car, while achieving higher speeds. ‘A flight from Manhattan to New York’s JFK airport, for example, would last only about five minutes instead of the usual 55 minutes in the car’, calculates Wiegand. ‘Instead of the 73 dollars a taxi costs, the jet covers that distance for six dollars.’ The founder doesn’t reveal the exact calculation, but at the very least, the actual energy costs are much lower than those of a car. They amount to seven euros per 100 kilometres.

Lilium is not the only one with the idea of a vertical take-off electric aircraft, however. From the Karlsruhe area comes the Volocopter VC200, which should also hit the market in 2018 (see TR 5/2014, pg. 36). The two-seater reaches up to 100 kilometres per hour and around half an hour of flight time. According to its designer, Alexander Zosel, this performance is perfectly adequate for urban flights. The batteries can also be easily swapped out, so there are no wait times.

The drones from Chinese company Ehang 184 go a step further: they fly autonomously. The passenger taps the desired location into a tablet computer and the autonomous air taxi takes them there. Furthermore, it can be controlled remotely from a command centre. The name 184 stands for one passenger, eight rotors and four arms. A 142 horsepower engine gives the quadrocopter an average speed of around 90 kilometres per hour. One battery charge lasts for around 30 kilometres, and the maximum load is around 140 kilograms. The first passenger tests are planned in Dubai as soon as this summer.

Nevertheless, indicators show that both the Chinese and Karlsruhe models are aiming for shorter distances. Lilium’s closest competitor may well be a battery-powered VTOL craft from NASA and a company named Joby Aviation. Both are working together to develop the S2. It offers room for two people and should achieve speeds of 320 kilometres per hour with a range of 300 kilometres. A prototype is planned to take flight as soon as this year. One difference is the propulsion: the S2 – like all competing VTOL craft – flies using rotors rather than jets. As a result, they are considerably more economical. The energy costs per 100 kilometres should amount to around three euros for the S2, that being less than half of the Lilium aircraft’s cost. The jets of the Lilium jet also make it significantly louder when taking off.

Wiegand is nonetheless sure that he is developing the better product: the Lilium jet requires neither gearboxes nor water-cooling, nor aerodynamic steering flaps. Just tilting electric engines. ‘This ensures reliable operation and low maintenance costs for the propulsion system’, according to Wiegand.

Above all, however, the two-seater is only intended to be the first step. Wiegand’s team is already working flat out on a five-seater. ‘These aircraft sizes make the best sense commercially’, says the engineer. ‘Ultimately our jets are not intended for sale to rich private individuals. We want our invention to available as a flying taxi for everyone.’ The five-seater, five-metre long electric jet should take off in 2019. The Lilium jet should then be available to order from 2025.

These aircraft would make the most sense in traffic-ridden urban centres. Be that as it may, time will tell whether the planes will eventually serve all residents, or just the wealthy amongst them (see ‘Der Futurist’ [The Futurist], pg. 98).

See all in Transportation…